Creso Pharma (ASX:CPH) is now in the box seat to acquire 100% of Canadian-based Mernova Medicinal Inc., an acquisition that would position CPH as a Canadian producer of legal cannabis.

Mernova is strategically placed to exploit the fast-growing Canadian market and is soon to begin constructing a highly scalable, licensed and fully compliant growing facility up to 200,000 sq. ft with the capacity to produce a minimum 2,000 kilograms of cannabis at a price per gram of C$7.87, generating revenues of C$15.74 million (A$15.9 million) per annum.

On a best-case scenario of 4,000 kilograms at a price per gram of C$7.87, revenues would be C$31.48 million (A$31.8 million) per annum. Furthermore, based on this revenue scenario CPH expects to pay off the acquisition and facility construction costs in 8-10 months.

The production numbers are impressive and would put the production yield in the same league as fellow North American listed peers with hundreds of millions of dollars in market capitalisation.

For instance, Canopy Growth is worth 40 times that of CPH, but only has a growing facility five times the size.

Once the growing facility is complete, the first crop will be planted... and with crops flourishing, the company will look to secure the final licensing under Health Canada’s Access to Cannabis for Medical Purposes Regulations (ACMPR).

The acquisition will enable CPH to gain access to a market valued at C$4.9 to C$8.7 billion in sales, just as CPH begins to position itself as a trusted marketplace brand, with high level experience and dependable products.

However it should be noted that CPH remains an early stage company and investors should seek professional financial advice if considering this stock for their portfolio.

Through the acquisition, CPH will be able to create a vertically integrated company that combines a growing IP portfolio, R&D and ample production capacity. Indeed, the combination of CPH and Mernova creates a company with extensive pharmaceutical industry expertise, global sales and distribution channels and a strategic location for CPH to leverage.

The combination of these two companies should significantly enhance CPH’s revenue potential, as it looks to gain a stronghold in not only the Canadian market, but global markets also.

With markets opening up and further legislation surrounding cannabis use to be in place in Canada by end of June 2018, Creso Pharma (ASX:CPH) continues to look at ways to increase its market access around the world.

As there are only 50 licensed producers currently operating under Health Canada’s Access to Cannabis for Medical Purposes Regulations (ACMPR), the opportunities for a smart operator in this field could be sizeable.

CPH has already caught the appropriate attention of potential business partners and investors. 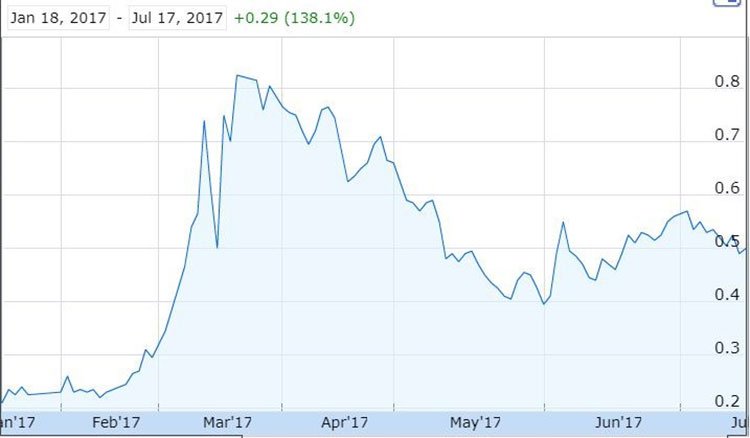 Could the company rise again to its circa 80 cent high and beyond, particularly with more news likely in the coming weeks and months?

While Mernova represents a huge egg in the CPH nest, other well-incubated eggs are now ready to hatch... In late June, the company released more information regarding its upcoming product launches – stating it was on track to launch its CannaQIX® human health nutraceutical product in the area of anxiety and stress in Q1/Q2 2018 and line extensions in the area of bone metabolism in Q2 2019.

Then there’s the launch of anibidiol®2.5 and anibidiol®80, the proprietary formulated hemp-based complementary feed products for companion and zoo animals... which also remains on target for a 2017 launch. But we’ll delve into that later.

Acquisition to take CPH to new level in cannabis market

The upside from this acquisition is put in perspective with a sturdy peer comparison.

Let’s have a look at CPH’s competition in North America.

CPH’s pending acquisition of Mernova – and its 200,000 sq. ft. facility with a potential production yield of 2000 kilograms – now raises the question of whether CPH is at its true market value at its current cap of just ~AU$30 million.

The companies listed above with similar growing facility capacities have caps between ~AU$250-700 million – a huge discrepancy.

Canopy Growth (TSX:WEED) has a facility just two times the size, with a production yield at only five times that of Mernova’s... yet it’s market capitalisation is forty times that of CPH. We haven’t even mentioned CPH’s impressive pharmaceutical side, with a range of high-grade cannabis and hemp-derived therapeutic products:

Is CPH in line for a re-rate?

Lastly, the completion of the sales licensing process under ACMPR will happen alongside a cash consideration of CAD$600,000, issuance of CAD$3,500,000 ordinary CPH shares.

When you combine CPH with its new recruit Mernova, you don’t just get the sum of the parts. What you end up with is exponentially more value.

With significant pharmaceutical industry expertise, global distribution channels, a long run of success in R&D, and a whole suite of existing high-grade products, CPH brings a maturity and sophistication to the match. Mernova brings the advantage of even greater access to the Canadian market as well as the new opportunity to compete as a grower.

Together CPH and Mernova become a vertically integrated company with an IP portfolio, a product range with depth (across human and animal health) and ample production capacity. End-product manufacturer meets ingredient manufacturer with each gaining proximity to expanded markets with proven revenue potential.

What the extent of CPH’s penetration into these markets will be remains to be seen, so investors should take a cautious approach to their investment decision based on all publically available information.

The following stats are the projections around legal cannabis spending in North America through to 2021:

Speaking of markets and macros, Canada is looking to legalise recreational use of marijuana by July 2018 . Clearly, a move that would drastically increase the addressable market by many multiples.

But not only that. It would also provide good practice for an ASX-listed company that is likely to be positioning itself towards a similar recreational-use market in the coming years... 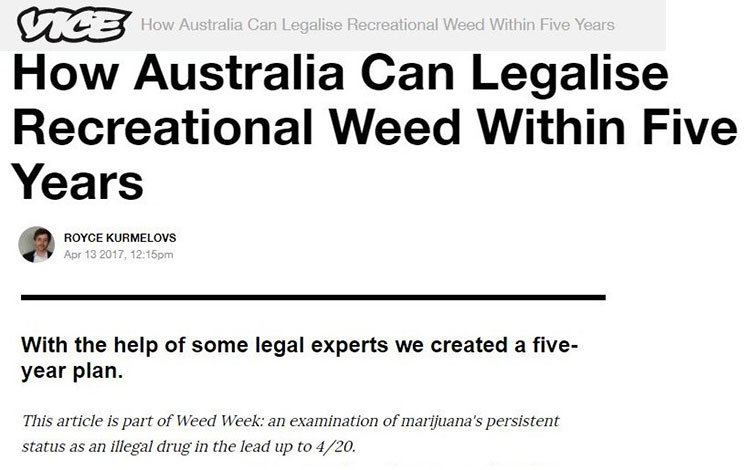 It will be forward-looking companies like CPH that are likely to survive the landmark change, if/ when it should happen. Most commentators consider it an inevitability rather than a possibility, however when it comes to medicinal cannabis, there seems no longer any question of if but when .

Considering it’s full steam ahead on medicinal cannabis for a whole host of countries across the globe, it’s a good thing CPH has done so much legwork to create therapeutic products and build a global footprint.

Both companies working together will likely strengthen the path to regulatory approval, too. The time it takes for CPH to go from the point of innovation to actual delivery of the product will shrink, thanks to the access it will have to Mernova’s 200,000 sq. ft. state of the art production facility.

Based strategically in both Switzerland and Australia, CPH has made major inroads in both countries – each having strong regulations when it comes to growing, use and sale of cannabis.

Trust – a key ingredient in the pot pie

The world is still at such an early stage of the pot-stocks story that there are not too many well-established companies with a proven record of accomplishment... yet. The sector is dominated by new smaller companies, some of whom aren’t necessarily in it for the long haul – leaving investors understandably wary.

With a lack of untested brands, the serious-looking, relatively ‘senior’ players are going to attract more and more of the market share. Which is another reason CPH has an upper hand over its competition: it has a proven record of keeping pace with regulatory changes and shifts in the industry, which smaller or less organised bio-techs struggling to keep up with.

As we mentioned early on, the company recently released news on a range of upcoming product launches.

The company said last month it was on track to launch its CannaQIX® human health nutraceutical product in the area of anxiety and stress in Q1/Q2 2018 and line extensions in the area of bone metabolism in Q2 2019.

And then there’s the launch of anibidiol®2.5 and anibidiol®80, the proprietary formulated hemp-based complementary feed products for companion and zoo animals, also remain on target for a 2017 launch.

An up-to-date timeline is below: 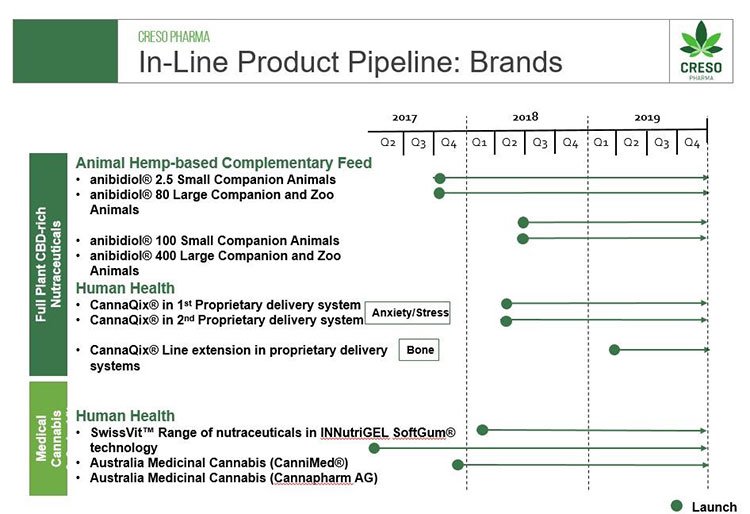 The good thing – no, the vitally important thing – for CPH is the fact that it is looking at a huge, and very hungry, addressable market.

The Mernova deal is big news, even for CPH, a company that is no stranger to consistent news flow.

Yet this remains a speculative stock at this stage and investors should seek professional financial advice if considering this stock for their portfolio.

You can read about these companies in our past articles including: CPH Deliver Australia’s First Medicinal Cannabis Shipment Under New Legislation; Aussie Medical Cannabis Market Opens Up: CPH Takes Early Mover Advantage and more.

And we’re sure CPH is looking to bring even more allies aboard.

Despite having progressed so far, there is still incredible potential upside and plenty of room to get in on the action – if you don’t mind the cracking pace.

Elixir Energy
ASX:EXR
Initial Investment
Jul 2019
Up as high as
503%
Read the analysis
We increased position in
May 2020 - Read more here