Creso Pharma (ASX:CPH) will be the first ASX listed stock to acquire 100% of a psychedelics company.

CPH is set to acquire Canada based Halucenex Life Sciences Inc., an established psychedelics company developing treatments for a range of mental illnesses.

Over a billion people worldwide have depression, anxiety, or post-traumatic stress syndrome or are dealing with substance abuse.

Studies have shown that psychedelics may be able to treat disorders such as depression, anxiety, substance addiction, and obsessive compulsive disorders.

In fact, growing evidence demonstrating that psychedelic medicines are safe and non-addictive when used in medical settings has sparked renewed interest in Psychedelic-Assisted Psychotherapy (PAP).

You can read more about PAP in this comprehensive Finfeed article: Creso Pharma set to be the first ASX listed entrant in new market

It’s early days but psychedelics have the potential to solve vast problems for large numbers of people.

Halucenex is focused on synthetic psilocybin. Psilocybin is the active ingredient in ‘magic mushrooms’ which has been shown to have considerable evidence-based mental health benefits.

Halucenex has access to one of the largest supplies of synthetic psilocybin in Canada.

Its short-term focus is to become a clinical drug pipeline provider.

On completion of all due diligence, shareholder approval and legal requirements, Creso will pay Halucenex $500,000 in cash and advance Halucenex $250,000 as a loan for the sole purpose of funding Halucenex’s operations prior to settlement.

Creso has also agreed to apply at least a further $1M in funding to Halucenex in the 12 months following settlement of the acquisition.

Details of the deal are as follows:

Halucenex has a three tiered strategy to become a vertically integrated provider of psilocybin and psychedelic assisted psychotherapy to revolutionise the treatment of mental illnesses: 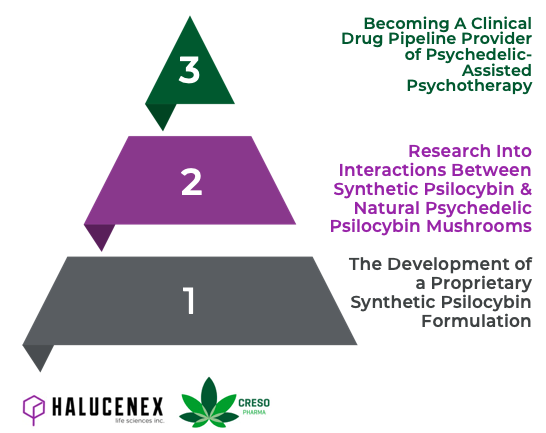 The acquisition could be transformational for CPH, putting it squarely in the frame to help treat this growing problem.

On the back of this, the psychedelic medicines market is estimated to be worth up to US$100 billion.

Recent studies have shown that psychedelics can be used to treat mental health illnesses such as:

The PTSD therapeutics market is expected to grow to US$10.5BN by 2025.

Halucenex’s affiliation with Canadian Veterans will provide a fast track to early revenues:

Could this be a case of right place, right time, right acquisition for CPH?

Psychedelics: a nascent, but growing industry

If investor interest in the space is anything to go by, there will be a raft of deals in the psychedelics space to come in the near future.

Here are two of the most recent prominent deals:

Mindmed was valued at over C$1.5BN at its peak in December, and now still commands a very robust C$1BN market cap.

MindMed has a drug development pipeline of innovative treatments based on psychedelic substances in clinical development and R&D.

There is also a strong connection between Mindmed and Creso.

Dr Miri Halperin Wernli sits on the boards of both CPH and Mindmed: she is the Co-founder and Head of Technology & Innovation at CPH, and is the President of MindMed.

Bruce Linton is a Strategic Advisor to CPH and sits on the Board of MindMed.

There are two people that are very experienced in both cannabis and psychedelic markets.

Halucenex, under CPH ownership, will be able to leverage off the expertise of both, plus the rest of the CPH team, who have years of experience in clinical trials, pharmaceutical product development, and go-to-market know-how.

Between their influence with CPH, Hallucenex and Mindmed, both Dr Halperin Wernli are set to make a strong statement in the overall alternative health market.

Here’s a look at how this space is growing:

And here are some of the broader headlines:

Business Insider: Kevin O'Leary of 'Shark Tank': Why I'm betting big on psychedelics, and how investors should be thinking about this opportunity

As speculative, early stage investors, this is just the kind of early trend we like to jump on - before the broader market cottons on.

Halucenex has a Controlled Substances License and CTA Permit under application, that once granted will make it one of just a small number of companies with this regulatory approval.

On receipt of its Dealer’s License, Halucenex can possess and conduct R&D of psychedelic molecules including psilocybin.

In anticipation of a worsening supply shortage, Halucenex has signed a supply agreement with one of Canada’s only pharmaceutical grade synthetic psychedelics manufacturers, Psygen Industries Inc., securing supply of 11.6g (11,600mg) of synthetic psilocybin for use in Phase 2 and Phase 3 clinical trials.

Halucenex is currently one of approximately 11 companies to secure supply from Psygen, significantly de-risking the clinical trial timeline.

There are, in fact, many benefits for CPH:

The Halucenex acquisition positions CPH at the forefront of innovation in the psychedelic medicines sector and continues the company’s turnaround, which has seen its share price consolidate around 20c and its market cap grow to over $200M.