News of $100 million IPOs , alongside an avalanche of parallel legislative changes around the world, builds a strong case for the burgeoning medicinal marijuana industry.

With so many medicinal cannabis stocks fighting for market share and threatening to steal the limelight, a company such as Creso Pharma Ltd (ASX:CPH) needs to do all it can to stay current and competitive.

CPH is looking to build a sustainable foothold in the Australian medicinal cannabis market and extend its reach well beyond domestic shores as well.

Things have been taken up a notch now though, with the company announcing in early June that it will be the first to export high quality medicinal cannabis from Switzerland to Asia Pacific and Latin America.

CPH has signed a Letter of Intent with leading Swiss-based Cannapharm. With all the advantages of getting in first (a position CPH are by now very familiar), it will look to exploit the position of exclusive distributor of top quality Swiss-grade medicinal cannabis products to these markets.

This follows CPH’s announcement in early May that along with its Australian partner, Health House International, it had successfully imported the first medicinal cannabis products into Australia.

LeafCann has agreed to supply GMP-standard cannabis and hemp-derived materials to CPH for use in its pharmaceutical grade therapeutic products. The two companies will also work together on future product development in both human and animal health markets.

However it should be noted that CPH remains an early stage company and investors should seek professional financial advice if considering this stock for their portfolio.

CPH is on track for the market introductions of its products for both human and animal markets: the innovative hemp-based nutraceuticals for human health and the complementary feed products for companion and zoo animals.

Discussions with potential commercial partners regarding CPH’s range of SwissVit TM premium Swiss nutraceuticals which have been developed in collaboration with INNutriGEL Switzerland using the INNutriGEL SoftGumsäproprietary delivery technology are underway, and the company’s complementary feed products for companion and zoo animals are on track to hit the market later this year.

With so many positives in the pipeline so far, CPH are making this look easy. That’s not to discount the immense due diligence that happens behind the scenes to get this far, with a tricky legislative landscape and unprecedented commercial territory.

Positive announcements for this $26 million-capped biotech keep pouring in, while at the same time the broader macro environment continues to work in its favour...

Take Tasmania for example, which is now preparing for patients to gain access to medicinal cannabis from hospital pharmacies in the state:

CPH is a case where the forces of a top management team with an excellent value proposition are coinciding spectacularly with macro momentum.

Let’s catch up with:

The last time we updated you on CPH in early May 2017 , the company had just made a shipment of medicinal cannabis into Australia: the first cannabis imported into the country under the new government legislation, in partnership with Health House International.

Since we first wrote about CPH in October 2016 its share price has been up as high as 290%, sending a pretty clear message that this company is growing up.

The most recent announcement to reflect its maturity is with regards to the products development and launch of its innovative hemp-based nutraceutical products for human health and the complementary feed products for companion and zoo animals.

CPH is also looking to introduce a range of SwissVit TM premium nutraceutical products to Australia and across the Asia-Pacific region.

The premium, high-quality nutraceutical products have been developed in collaboration with INNutriGEL Switzerland using the INNutriGEL SoftGumsäproprietary delivery technology that was specifically formulated for that range.

This innovative patented delivery technology uses buccal absorption of the active molecules (through the blood vessels on the inside of the mouth), offering high bioavailability and absorption of the vitamins.

The products are also heat resistant up to 70oC ensuring a non-sticky SoftGum compared to competitor products. These products can also be made to vegan, halal and kosher standards if required. In addition, the SoftGumsäare made from vegetable starch, not animal waste material like existing gelatin-based vitamin competitor supplements on the market.

Other compelling news from this ASX biotech is the announcement it has become the first company to export high quality medicinal cannabis from Switzerland into Asia Pacific and Latin America: 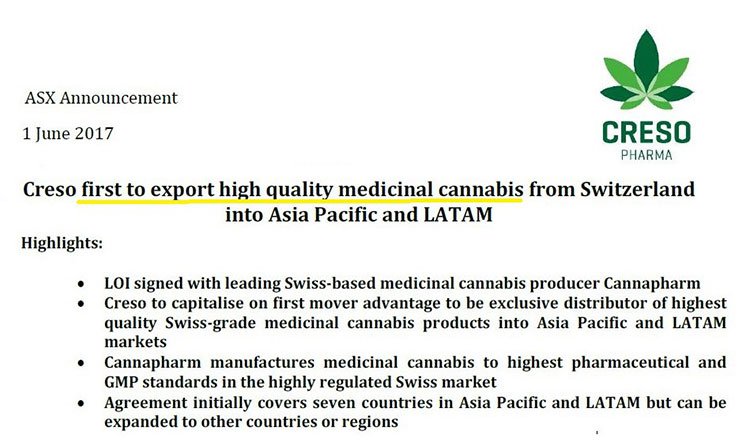 Cannapharm produces medical marijuana to the highest pharmaceutical and GMP standards in what is an intensely-regulated Swiss market, so for CPH to bring such expertise into the fold is no small feat.

The products will be available to be prescribed by a physician, in line with each country’s laws, for a range of serious medical conditions. The included countries are Australia, New Zealand, China, Brazil, Chile, Colombia and Mexico.

What the extent of CPH’s penetration into these markets will be remains to be seen, so investors should take a cautious approach to their investment decision based on all publically available information.

Cannapharm is not just any company — it has 15 years’ experience manufacturing products that meet the highest pharmaceutical and GMP standards in Switzerland.

It’s no doubt a deliberate and strategic move for CPH to partner with a group boasting such significant expertise as well as experience in a tightly-regulated market.

In the medicinal marijuana space there’s not much room to be blasé — a company looking to make it will want to be well and truly dotting its I’s and crossing its T’s.

All of CPH’s decisions so far seem have been made after conducting thorough due diligence — a key strength of any biotechnology company.

The other meaty piece of news added to CPH’s packed plate is its strategic agreement with pre-eminent Australian medicinal cannabis producer LeafCann Group, which it announced to market in May.

LeafCann is an Australian-based medicinal cannabis grower established by Chris Nasr and Elisabetta Faenza, who are both motivated by personal experiences with chronic illness and pain. Its ultimate goal is to provide Australians with safe and affordable access to the benefits of cannabis-based medical therapies.

The agreement stipulates that LeafCann will supply GMP-standard cannabis and hemp-derived materials to CPH for use in its pharmaceutical-grade products.

LeafCann is looking to start clinical trials and commence cultivation of medicinal cannabis within 12 months.

This is yet another move which should accelerate the company’s development and commercialisation of products, and place it at the forefront of the local market; poised to capitalise on the full suite of legislative changes when they come into force...

Not to mention the interest generated by such a depth of consecutive news flow, at a time when Australians are beginning to pay serious attention to legal changes around marijuana.

Strategic positioning in Australia and beyond

CPH has announced a string of strategic partnerships and agreements in recent months.

It’s all part of the broader plan to stay ahead of the competition and capture maximum market share both in Australia and internationally. The more markets take notice, the more CPH will be in a position to raise funds and drive their vision forward even further.

The announcement of CPH’s agreement with Cannapharm, from June 1, was picked up in the media, including this story on News.com.au: 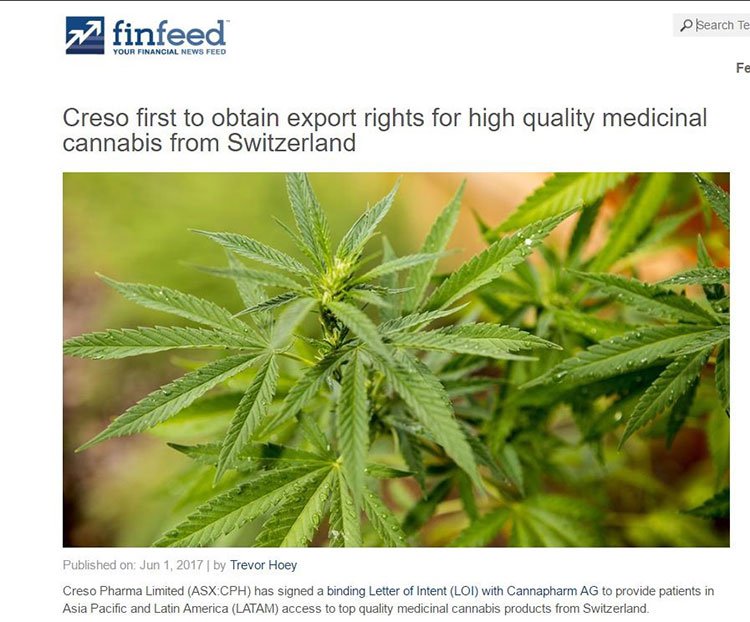 With its plans to penetrate both the Asia Pacific markets as well as the vast Latin American market, CPH could well succeed in bringing in major revenues from multiple streams sooner rather than later.

This would position it nicely to fund more product development, more trials, more partnerships and so on...

Yet this remains a speculative stock at this stage and investors should seek professional financial advice if considering this stock for their portfolio.

Its existing agreement with Sin Solution (announced a few months ago) will help get CPH’s premium Swiss Vitamin nutraceuticals and cannabinoid-derived nutraceutical products in Brazil — targeting the privately insured middle class population of 60 million people , amounting to a potential market upwards of $US800 million. 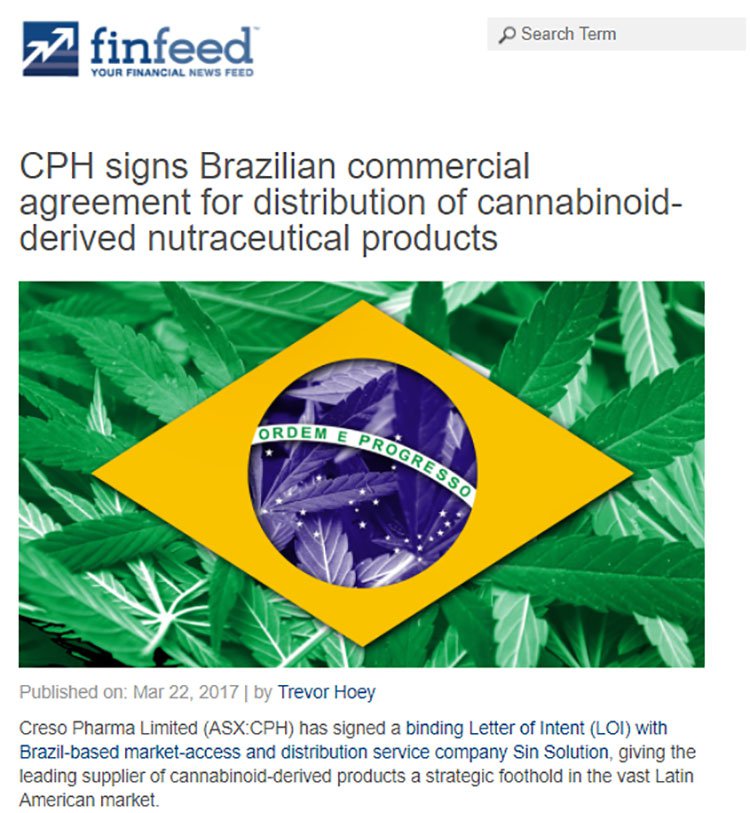 And here’s a look at the size of the estimated medicinal marijuana market (all in the billions) of four other major regions:

The diagram below summaries the range of applications for cannabis and hemp-derived therapeutic products, including the benefits CPH is looking to exploit: 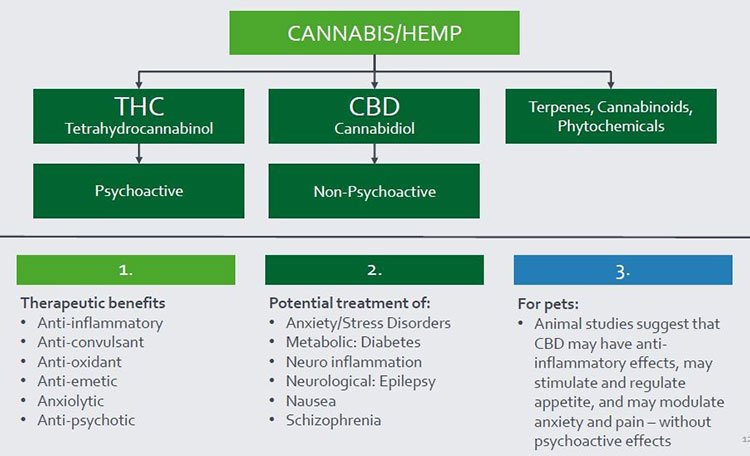 We’ve mentioned the value proposition, the share price, partnerships and deals... but then there’s the bottom line.

We expect the rate of money changing hands to increase with all of CPH’s well-laid plans, products and partnerships, but what are they actually holding right now?

At the end of the March quarter, CPH reported holding $10.6 million in cash.

Below is a more complete list of wins this company has notched up since it first listed on the ASX (and when we first began writing about it): 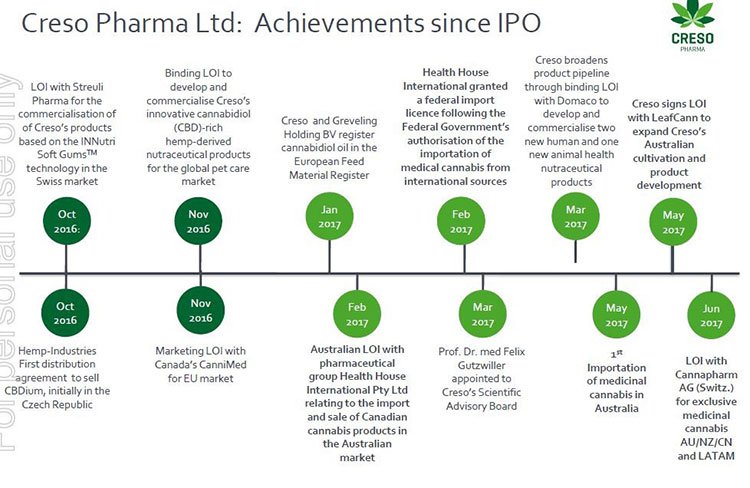 The grass is looking pretty green and CPH hasn’t even got to ‘the other side’ yet.