We have been invested in and following CPH’s rebirth since October last year, and are closely following their very early entry into the psychedelic medicine space.

While we do have some question marks over a few areas of the CPH business (too much promotion and pointless announcements) we DO like CPH’s recent psychedelics acquisition and progress of their psychedelics for mental health direction.

One in four adults experience some form of mental illness each year, yet modern medicine understands so little about mental illness or how to treat it. We expect that at some point in the near future market sentiment will sway towards psychedelic treatments for mental health...

The market seems to like CPH’s psychedelics progress too with a gradual uptick in CPH’s share price breaking a long sideways journey. It turned back upwards two weeks ago when CPH finally completed the long mooted acquisition of Halucenex, a Canadian psychedelics company about to enter Phase 2 clinical trials for treatment in PTSD.

Psychedelics are being used in the treatment of mental health conditions, and is a market with major growth potential. The PTSD therapeutics market alone is expected to be worth US$10.5B by 2025 and CPH is an early mover.

CPH yesterday went on to announce the successful grant of a rare “Controlled Drugs and Substances license” licence for Halucenex in Canada, another positive step in their psychedelics story.

We think this acquisition and license grant is actually pretty good and certainly worth commenting on.

This licence significantly increases the company’s scope of work in regards to psychedelics for mental health — giving the green light to possess, sell, transport and conduct R&D on a broad range of psychedelic substances including psilocybin, ketamine, LSD and MDMA, amongst others.

We continue to hold a position in CPH because we think if the market suddenly switches on to the potential of psychedelics for mental health (like it suddenly did with lithium for electric batteries, for example), CPH could rerate quickly as the only listed psychedelics play on the ASX (that we know of). CPH also continues to increase revenue from its main cannabis business.

The headwinds however for CPH, in our opinion, are that in June it announced a fairly confusing overseas merger proposal that we think spooked a few shareholders and has weighed down the share price over the last couple of months as they exit.

Our interpretation of the proposed merger is that CPH shares will swap for shares traded on a Canadian stock exchange, which we suspect many investors didn’t like — most of whom have probably sold by now.

CPH also has a habit of releasing a lot of “nothing announcements” and doing a LOT of paid promotion, which we think can tend to drown out ACTUAL progress made by the company.

BUT in the last few weeks, CPH have delivered a number of announcements that we see as being quite meaningful:

The above announcements, combined with the company’s sheer volume of promotional activities, do appear to be working to absorb any sellers who were unsure about its proposed merger with psychedelics company, Red Light Holland, that was announced two months ago.

The merged entity, to be named The HighBrid Lab, will be a “global psychedelics and cannabis company, specialising in recreational products, applied science, technology and innovation”.

It is intended to be listed on the Canadian securities exchange under the code ‘TRIP’ and on OTC markets as ‘TRUFF’, and will see the addition of leading cannabis and psychedelics entrepreneur, Bruce Linton, to the company’s board of directors, along with other former Canopy Growth management.

Looking at the chart, we think selling MIGHT now be drying up given that CPH share price has shown a little uptick, especially over the last few days.

Our read on this is that the market likes the Halucenex acquisition and the dealer’s license, and COMBINED with post merger announcement, sellers having left the building: 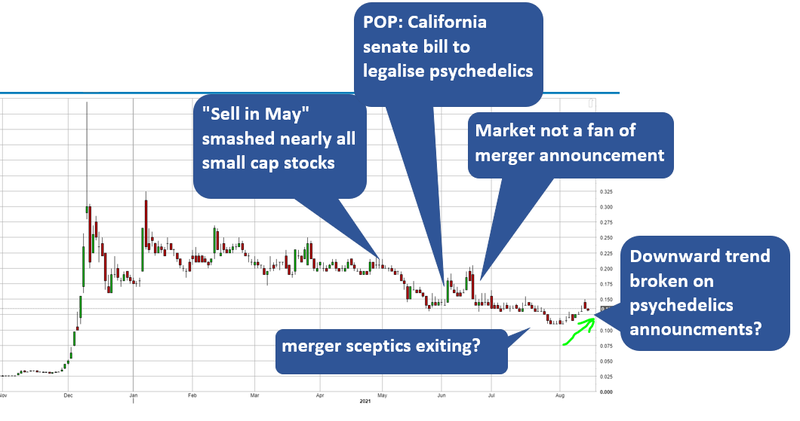 The key thing CPH needs to do now is provide another update on their proposed merger AND for there to be a market wave of interest into the psychedelics space OR something meaningful for their cannabis business.

We think CPH could do well if there is a sudden surge of investor interest in the cannabis and medicinal psychedelics space.

While investors have had their ups and downs with CPH, the Phase 2 psychedelics trials are looking pretty interesting...

Psychedelics, including psilocybin (the compound found in magic mushrooms) work, in part, in a similar way to traditional antidepressants, affecting the chemical pathways in the brain involving serotonin (the hormone that influences mood and makes us feel good).

Halucenex’s trials, completed ahead of the planned Phase II clinical trial, have already provided validation of the company’s psilocybin and indicated that it is safe for human consumption.

CPH expects that on completion of its proposed merger with Red Light Holland, its presence in North America will open new doors to pursue joint venture and licencing agreements with large pharmaceutical companies and other industry partners.

Again, this licence significantly increases scope of work in regards to psychedelics — giving the green light to possess, sell, transport and conduct R&D on a broad range of psychedelic substances including psilocybin, ketamine, LSD and MDMA, amongst others.

Halucenex is now one of few companies globally with a Dealer’s Licence and the ability to work with psilocybin and other psychedelics with Health Canada approval.

With its licence in hand, Halucenex will now expedite its clinical trial application (CTA) with Health Canada — a key step in the commencement of its Phase II clinical trial to test the efficacy of psilocybin on treatment resistant PTSD.

The application will be lodged in the coming weeks, then be subject to a 30-day review with Health Canada.

Halucenex Founder and CEO Bill Fleming said, “We are now very well placed to deliver on a number of value accretive initiatives, which have the potential to unlock significant value for shareholders and further cement our standing as a leader in emerging psychedelic inspired therapies.”

CPH confirmed that its growth prospects over the coming months remain very strong, with additional purchase orders expected from new and existing provincial partners and wholesale groups in the near term.

Mernova has also secured approval from Health Canada for an extension to its sales licence. This allows the company to progress the sale of its product range for medicinal purposes direct-to-patients, without the need for provincial wholesalers. 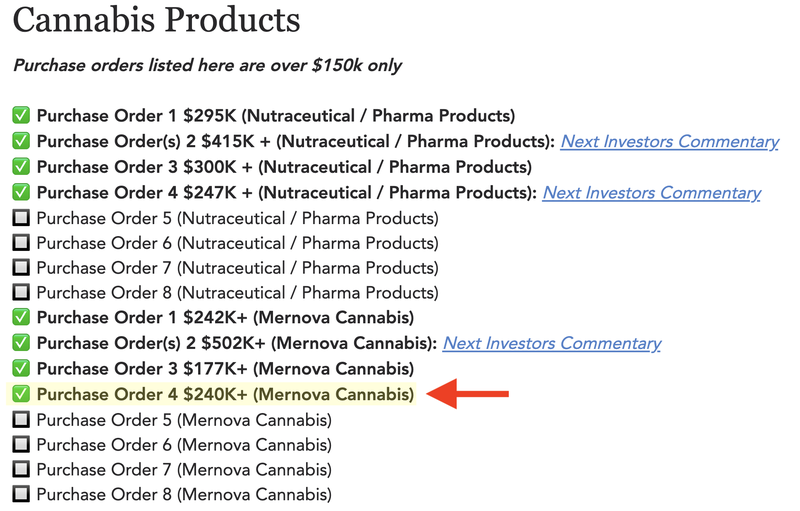 Our investment in CPH

We have been following the CPH story for a while now and re-entered about a year ago at 3¢ as a short term trade. This turned out pretty well so we decided to hold CPH for the longer term. Read: We are Rolling the Dice on this One...

We participated again at 19¢ in March. This hasn’t worked out too well SO FAR, but hopefully it can come back if CPH delivers a material announcement OR a wave of interest floods into psychedelics.

Read: We Participated in the CPH placement

CPH is also in the middle of a proposed merger, here is out commentary on what we DO and DON’T like about the deal (we expect to hear an update from CPH on its progress soon)

Read: CPH to be the First ASX Stock to Acquire 100% of a Psychedelics Company