The combination of both companies will lead to the formation of a global psychedelics and cannabis company.

We don't actually know of any other listed companies that have BOTH cannabis and psychedelics products - so this could be a world first.

The merged entity will have over five ex Canopy Growth executives, who oversaw its growth from a penny stock into a multi billion dollar cannabis machine.

Bruce Linton, ex Canopy Growth, is joining the merged company as Executive Chairman. It will also have ex Canopy Growth M&A Director as Executive Vice President and Chief Strategy Officer - William Lay - he has overseen/managed over $5BN in cannabis M&A transactions in the past.

Our reaction to the CPH deal

We have read through today’s CPH announcement and merger docs - but it was just a quick read at this stage as there are 162 pages to digest.

Below is our initial reaction to the transaction between CPH and Red Light Holland, including a quick deal terms summary, plus what we DO and DON’T like about the deal.

This is our opinion only as CPH shareholders, which comes after our quick scan of the deal and the documents this morning - so we may have missed some terms or small print at this point in time.

In short, we like the deal (note: we still need to look a bit closer at Red Light Holland) and we think there is good value that can be unlocked by combining the companies, including plugging some of both their respective weaknesses and solving some of the things we don’t currently like about CPH’s governance.

Our current plan is to hold and see what happens in the lead up to the transaction, especially post tax less selling finishes this month. We will also be watching the webinars to discuss the deal from both Red Light Holland tonight at 10:30pm AEST and CPH and tomorrow at 10am to help inform our view on the deal.

Here is a teaser from Red Red Light Holland CEO Todd Shapiro and ex Canopy M&A guru William Lay talk about the transaction today via these videos posted on Twitter earlier this morning.

Who CPH is merging with:

Red Light Holland is a psychedelics company that produces and distributes premium psychedelic mushrooms (truffles) to the legal recreational market in the Netherlands.

Red Light Holland is listed on both the Canadian Stock Exchange, under the ticker code TRIP, and also on the OTC under the code TRUFF (get it... truffles).

As of last night after news of the transaction broke in Canada, Red Light Holland had a market cap of A$135M.

The two companies once merged will be called “The Highbrid Lab” - with their website already up and running - https://highbrid.co/.

Once the transaction is complete, the new merged entity is expected to have an implied pro forma equity value of A$371M - based on the closing price of CPH and Red Light Holland shares on 15th June.

The ratios of the deal appear to be fixed, so the more that Red Light Holland shares go up, the better the deal is for CPH holders.

If you hold CPH shares, here’s how to calculate the hypothetical value of your shares in the merged entity assuming the merger goes ahead (this is our very rough napkin calc - don't make decisions based on this info).

Red Light Holland shares last traded at CAD$0.38 which is AUD$0.41 at the current exchange rate.

These are very rough calcs, and keep in mind both CPH and Red Light Holland prices will fluctuate each day - the key takeaway is that because the deal ratios are fixed, the more that Red Light Holland shares rise, the better the deal becomes for CPH holders.

You can track the Red Light Holland share price under the ticker code CSE: TRIP here. You will need to apply a currency converter to get it into Australian dollars here.

This merger deal is PROPOSED at this stage, meaning that there are still a bunch of approvals and hoops to jump through before it can go ahead.

Both CPH and Red Light Holland shares will continue to trade during this time.

Ultimately if the deal proceeds, CPH holders on the record date of Friday 24th September 2021 will end up holding Red Light Holland shares listed in Canada.

We have only done a quick scan, and the stuff we DON’T like on deals is usually buried deep in transaction docs in the fine print. We will keep reading over the next few days and provide further updates.

Here is what we found on quick scan:

CPH is one of our bigger positions after we invested at 3c then again in the placement at 19c, so we will be taking a close look at this deal and will continue to provide you our insights as we work through the 162 page deal document.

Here is the timetable of events ahead: 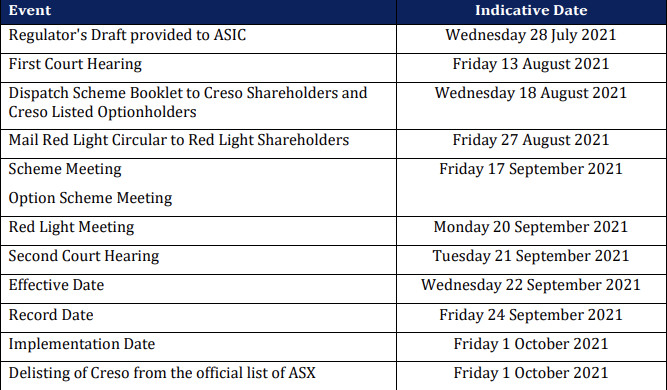